Saratoga Springs, NY—McMahon of Saratoga Thoroughbreds is celebrating 50 years of Equine Excellence in 2020. To kick off the golden anniversary the farm announced it will host a Stallion Open House on Sunday, March 8 from 12:00 to 3:00 p.m. Breeders will be able to inspect McMahon’s 2020 leading NY Stallion Central Banker and the latest stallion addition, Solomini, a multiple Grade 1 two-year-old by two-time Horse of the Year Curlin.

Joining them for his first season at McMahon is Redesdale, who stood at Hidden Lake Farm in 2019, his first year at stud. “Redesdale bred 81 mares in 2019,” said Joe McMahon. “With his breeding, being by Speightstown and out of a graded stakes-winning full sister to Danehill, there is just loads of upside to him.”

Attendees are encouraged to arrive with broodmare pedigrees as the farm will be offering Open House-Day Deals, including foal shares, mare share, and co-breeder contracts for approved mares. Bonus seasons with signed contracts, and loyalty discounts will be offered.

Central Banker, the second leading North American third crop sire by cumulative dirt earnings leads the roster in stud fee at $7,500, Solomini stands for $6,500, Redesdale at $5,000 and champion sire Teuflesberg is $3,000. All fees are live foal.

Light refreshments will be served. 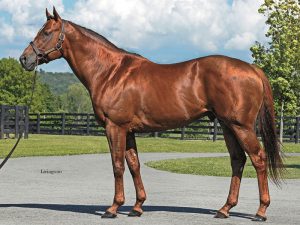 Arindel Farm, a leading Florida based owner/breeder,  has joined Sequel Stallions[2] New York in support of Union Jackson[3]. Twelve mares from the farm in Florida will go to New York to be bred to the Stonestreet son of Curlin.

“The exceptionally speedy Union Jackson is not only by two-time Horse of the Year and exceptional sire, Curlin, he is out of Hot Dixie Chick, who was not only the fastest two-year-old filly of her crop but is also half-sister to Grade 1 Kentucky Derby victor Always Dreaming. He presents the perfect opportunity for us to really double down on the New York program,” explains Arindel Farm’s Brian Cohen. “I can’t imagine a better team than Sequel New York and Stonestreet who have already been supporting the stallion with very nice mares.”

A son of two-time horse of the year and champion sire Curlin, out of Grade 1 stakes winner Hot Dixie Chick, half-sister to Grade 1 Kentucky Derby Winner Always Dreaming, Union Jackson was bred in Kentucky by Barbara Banke’s Grace Thoroughbred Holdings, campaigned by her Stonestreet Stables, and trained by Steve Asmussen.

Union Jackson broke his maiden by 7 3/4 lengths going six furlongs at Keeneland becoming a TDN Rising Star. He went on to win an 8 1/4-length score in the Sam Houston Sprint Cup Stakes and a victory in the Iowa Sprint Handicap, which he took while running six furlongs in 1:08.75. On the board in 9 of 11 starts, he won 6 races by over a combined 27 lengths with earnings of $273,874.

The Lieutenant’s first foal is a filly 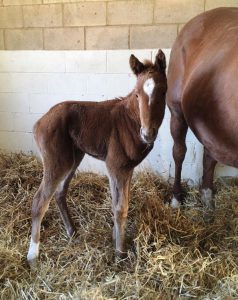 The first foal by late stallion The Lieutenant is a filly born Saturday, February 1 at Keane Stud[2] for breeder Meadow Hill Lane Farm.

She is out of Keysong, a Kentucky-bred winner by Songandaprayer who has already produced a winner. Keysong’s second foal, Kentucky-bred Song of the Nile by Pioneerof the Nile, brought $575,000 at the 2015 Keeneland September yearling sale. Keysong is a half-sister to Pebble Stakes winner Miss Catalyst and from the family of 1978 Eclipse champion 3-year-old filly Tempest Queen.

“We will cherish every foal we get by The Lieutenant and are very happy that the first one came to one of our favorite New York breeders, Meadow Hill Lane Farm,” said Sequel owner Becky Thomas.

A talented, graded stakes-winning miler, The Lieutenant by Street Sense was a half-brother to Triple Crown winner Justify. Tragically, he was among four stallions killed at Haras Barlovento in Cañete, Peru after farm invasion on Dec. 21. 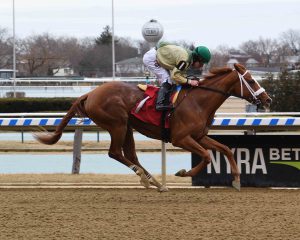 My My Michelle is a 3-year-old homebred for Len Riggio’s My Meadowview Farm, which also bred and raced multiple graded-placed stakes winner Stephanoatsee. Trained by Michelle Nevin, the filly placed in both her two starts at 2 and went off the favorite Jan. 31. She stalked pacesetter Beautiful Karen, wearing her down in the stretch and drawing away to win by 2 1/2 lengths. The final time was 1:44.17 on a fast track.

Bred in New York, My My Michelle is the first winner out of the stakes-placed Noble Causeway daughter Canal Six. The mare’s family includes grade 3 winner Pataky Kid , grade 3-placed stakes winner Prominent Feather, and black-type winners Gambler’s Justice and Wild Remarks. Canal Six has a 2-year-old colt by Shackleford named Acasha’s Intuition and is expecting a foal by Big Brown this year.

Stephanoatsee, an A.P. Indy half brother to Preakness Stakes (G1) winner Shackleford (Forestry), won the listed Barbaro Stakes at 3 and placed in the Strub Stakes (G2) and Discovery Handicap (G3) before being retired with a 3-4-1 record out of 21 starts. As a sire, he has been represented by three starters and stands for a private fee at Sequel Stallions. 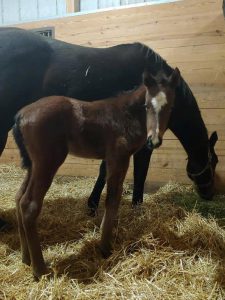 New York-based sire Redesdale[2], a son of Speightstown, has produced his first foal — a filly born on Chris Bernhard’s Hidden Lake Farm in Stillwater New York. The news was announced on January 23.

The filly is out of Rgirldoesn’tbluff, a stakes-winning and graded stakes-placed Virginia-bred daughter of Pine Bluff. The earner of more than $240,000 in 25 career starts, she has already produced a pair of winners.

Redesdale is out of Grade 3 winner Harpia, by Danzig, who is a full sister to breed-shaping sire Danehill and granddaughter of Natalma, the dam of Northern Dancer.

Redesdale dominated the competition in his first three starts before his career was cut short by injury in his fourth start, the Grade 3 Commonwealth Stakes at Keeneland.

Redesdale stands at McMahon of Saratoga Thoroughbreds for a 2020 stud fee of $5,000.

Frank Conversation[1] was represented by his first foal on January 17, 2020 when Looksgoodfromhere foaled a chestnut filly at Saratoga Glen Farm[2], who bred and owns the youngster.

Looksgoodfromhere is a winning New York-bred daughter of Freud, whose first foal, Missionatthespa by Mission Impazible, is a winner. Looksgoodfromhere is also a half-sister to the dam of stakes winner Giant Cruiser. The filly’s second dam is Broad Expectations, a stakes performer and full-sister sister both to Breeder’s Cup Classic winner Concern and graded stakes winner Tennis Lady.

Click here for a link to foal video[3] from the Saratoga Glen Farm Facebook page as the filly finds her feet for the first time. 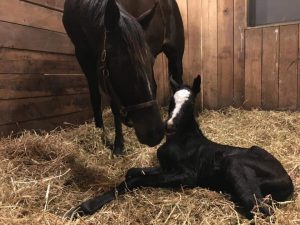 The first foal sired by Destin[2] was born at Saratoga Glen Farm[3] for breeder Amber Cobb on January 11. The dark bay colt is the first foal out of the placed Take Charge Indy mare Jurere, who is from the immediate family of Grade 1 millionaires Summer Squall, Court Vision and champion A.P. Indy. Jurere was bred in New York by SF Racing Group, Inc. 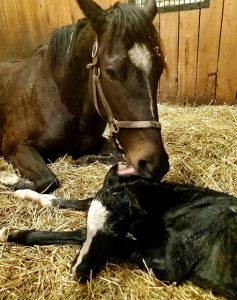 [4]A full brother to Grade 1 stakes-winning sire Creative Cause, Destin set a new track record in the Grade 2 Tampa Bay Derby winning by a length going 1:42 4/5 in the 1 1/16 mile contest. Three months later he was defeated a nose by Creator in the Grade 1 Belmont Stakes. Destin retired with 5 wins, 2 seconds and 2 thirds in 15 starts with earnings of $947,800.

Destin is a 5-year-old son of champion sire Giant’s Causeway out of Grade 1 millionaire and graded-stakes producing Dream Of Summer who defeated Ashado in the G1 Apple Blossom. Destin is also full brother to graded stakes winning filly Vexatious, as well as half-brother to black type placed producer Taboo.

Destin stands at Sequel Stallions New York[5] for Gainesway Farm, Eclipse Thoroughbred Partners, Twin Creeks Farm and Sequel. Destin, who bred 84 mares in 2019, will be available for inspection at the Sequel Open House on January 19.

The 2020 Sequel New York stallion show on January 19 has been changed to an Open House focusing on “giving back” and breeder interaction. For every contract signed on site and for every winner of the stallion season raffle, Sequel will donate $100 to the to the Thoroughbred Aftercare Alliance (TAA) on behalf of the breeder and match the total at the end of the day. In lieu of a fancy sit-down dinner with lots of giveaways, hats and swag, this year the focus will be on the breeder.

Said owner Becky Thomas, “We have received so much feedback from our breeders regarding the tragedy in Peru and our beloved stallion, The Lieutenant. While we are heartbroken, there is nothing that we can do about it. What we can do is to help raise money for an excellent program that helps horses here in the United States.”

“We have been putting these shows on for many years and have spent so much money to do so. We feel the money will be better spent this way and it will give us the opportunity to spend time with our breeders and to talk to them about their horses,” added Thomas. “The new open house format also gives our breeders an opportunity to meet Dr. Bill McQuire, our new assistant manager, as well as welcoming our new 2020 interns from Arkansas to South Africa.”

Stallions will be shown throughout the day and the raffle will be held the following Friday giving breeders more time to sign up. Standing at Sequel in 2020 are Freud, Destin, Laoban, Mission Impazible, Stephanoatsee and Union Jackson.

The Open House will take place Sunday, January 19 from 12-4 at the farm in Hudson, NY. A light lunch will be served. For more details, please visit the Sequel website at www.sequelnewyork.com[3] or call the office: (800) 925-2913.

Rockridge Stud[2] today announced the stud fees for its 2020 roster and set the date for the farm’s annual stallion show and open house for Saturday, January 25.

The stallion show and open house will take place Saturday, January 25 from 12 noon – 2 pm. A full lunch buffet will be served, in addition to drawings for free seasons to each stallion.

Saratoga Springs, NY—McMahon of Saratoga Thoroughbreds announced today their annual stallion show will be held Saturday, December 21 from 12:00 to 3:00 p.m. Breeders will be able to inspect McMahon’s latest stallion addition, Solomini, a multiple G1 2YO by 2-time Horse of the Year Curlin. Just added to the roster last week, Solomini leaves Kentucky Friday for New York.

“Solomini is by far is the most precocious son of Curlin,” commented McMahon, “Solomini made 4 starts at 2, winning his debut at Del Mar, followed by runner-up performances in the Breeders’ Cup Juvenile-G1, FrontRunner S.-G1 and in his last start at 2, Solomini finished the race first but was disqualified in a controversial decision in the Los Alamitos Cash Call Futurity-G1.” His trainer Bob Baffert commented, “It’s really too bad they took him down, he was the better horse today.”

Joining him for his first season at McMahon is Redesdale, previously standing at Hidden Lake, his first year at stud was 2019. “Redesdale bred 81 mares in 2019,” added McMahon, “with his breeding, being by Speightstown and out of a graded-stakes winning full sister to Danehill, there is just loads of upside to him.”

Top four second crop North American sire by cumulative dirt earnings Central Banker leads the list in stud fee at $7,500, Solomini will stand for $6,500, Redesdale at $5,000 and champion sire Teuflesberg will be $3,000. All fees are live foal.

Light refreshments will be served. For details contact McMahon of Saratoga Thoroughbreds (518) 587-3426.