Snapper Sinclair to stand at McMahon of Saratoga 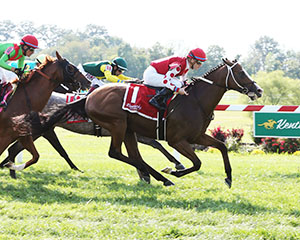 Snapper Sinclair, winner of the 2021 Tourist Mile at Kentucky Downs, will enter stud in 2023 at McMahon of Saratoga Thoroughbreds. Coady Photography.

McMahon of Saratoga Thoroughbreds in Saratoga Springs will add stakes winner and $1,857,642-earner Snapper Sinclair to its roster for the 2023 season. The 7-year-old son of City Zip out of the Yes It’s True mare True Addiction will stand his initial season for $5,000 live foal, stands and nurses.

McMahon of Saratoga will welcome Snapper Sinclair to the stallion barn at 180 Fitch Road in Saratoga Springs from 1-4 p.m. Saturday.

“I love this horse because he showed up every time, whether dirt or turf, sprinting or two turns,” said Jeff Bloom. “He raced in the toughest company throughout his career and always tried.”

“What a cool horse, he’s so versatile-could run on any surface and would run against anyone,” Asmussen said. “I love him and believe he deserves a chance at stud.”

Bloom purchased Snapper Sinclair for $180,000 at the 2017 OBS April sale of 2-year-olds in training. He’s the sixth foal out of the Grade 2-placed True Addiction, who is also the dam of stakes-placed winner Cat Addiction and winners Yo No Se, Tripendicular and Phonybooksnrecords.

“His combination of race record, pedigree and high regard for connections of Jeff Bloom and Steve Asmussen convinced us,” said McMahon of Saratoga’s John McMahon. “You never know from where a stallion might come and his sire City Zip started in New York at $7,500 before he moved to Lane’s End and became a leading sire. You think about iconic stallions like Storm Cat, Tapit, War Front, Into Mischief, and they all stood for $10,000 at one time, and we believe Snapper Sinclair has enough of the right ingredients to become a successful stallion.”