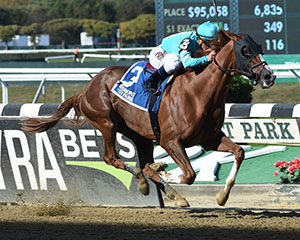 Twisted Tom came close to his 10th victory in Saturday’s fifth race at Aqueduct, losing in the 1-mile race run over a muddy track by just a half-length in his 42nd career start.

He won’t get another chance to reach double-digit wins, and nobody seems to mind.

“Call it a career for the veteran (8-year-old) New York Bred Champion Twisted Tom!,” Schosberg wrote. “Winner of nearly $1M in earnings (more with all the bonuses from the NYB Breeding and Development Fund bonus program ). He will be headed for ReRun up in East Greenbush through our NYTHA sponsored Take The Lead Thoroughbred Retirement Program.”

More than 60 positive comments flowed in on Facebook and fans gushed over the news.

“Such a relief that Twisted Tom is finishing racing,” said Bill Wilmot, D.V.M., who co-bred Twisted Tom with his wife Joan Taylor, D.V.M. “Many thanks to Rick!”

The New York Thoroughbred Horsemen’s Association created Take The Lead to facilitate the search for rehabilitation and retraining placements for retired racehorses from the New York Racing Association circuit.

Twisted Tom made all but five of his 42 starts at NYRA tracks from 2016 until Saturday. The Creative Cause gelding officially retires with a record of 9-7-5 and earnings of $939,135.

A towering gelding standing 17 hands, Twisted Tom was consigned twice as a yearling at Fasig-Tipton’s Saratoga New York-bred and Kentucky October sales, yielding two $22,000 bids that did not meet his reserve. Wilmot and Taylor sent Twisted Tom to Niall Brennan with initial plans to race but later opted for the OBS April sale. A decent-if-not-great presale work and some good-feeling antics around the barn forced his breeders to change course again.

“He would come out in the morning that week after he breezed and he was really feeling good and would stand on his hind legs,” Wilmot said in early 2018. “That removed him from the short lists. We didn’t want three RNAs on him because people would think he had tuberculosis or something.”

Twisted Tom was sold privately to Thomas Brockley and gelded. He made two starts for Brockley and trainer George Weaver in 2016, winning his second start going 1 mile on the grass in late September at Belmont Park before being sold again. Steve Young brokered the second deal and Twisted Tom landed in trainer Chad Brown’s barn in the fall of 2016. He finished sixth in an allowance for his new connections before clocking off three straight wins to start 2017. Twisted Tom won the Private Terms and Federico Tesio over open company at Laurel Park to earn a spot in the field for the Belmont Stakes, where he finished sixth. 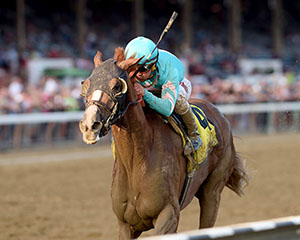 Twisted Tom won out the rest of the season, taking the New York Derby at Finger Lakes, Albany Stakes at Saratoga and Empire Classic Handicap at Belmont to earn his New York-bred championship.

Twisted Tom made 10 starts for Brown from late 2016 to August 2018 before being transferred to Bill Mott. He made five starts for Mott from late 2018 until he was claimed for $62,500 by trainer David Cannizzo and owner Mark Breen in June 2019. After five starts for those connections, Drawing Away Stable and A.C. Avila claimed Twisted Tom for $25,000 in November 2019.

He won twice in seven starts for Drawing Away and Avila, both times at Aqueduct in the winter of 2019-20, before he was claimed for $40,000 by Repole Stable and Mike Maker in early August 2020 at Saratoga. Twisted Tom was claimed three times more from October 2020 until late last July at Saratoga, ultimately by owner Robert Amendola and trainer Mertkan Kantarmaci for $40,000. Kantarmaci and Amendola actually claimed Twisted Tom twice, also haltering him for $40,000 in October 2020.

Twisted Tom made five starts for Amendola and Kantarmaci to close his career, the best finishes for $10,000 tags Nov. 19, 2021 and Saturday.

“Very happy to be able to give this classy horse his last career start from our barn,” Kantarmaci commented on Schosberg’s Facebook post. “Full of big heart … finally (a) safe and sound end. We will miss the big boy asking for his candies and carrots every day.”

Twisted Tom figures to get plenty at ReRun in East Greenbush, where Lisa Molloy and her team have transitioned hundreds of ex-racehorses onto second careers.