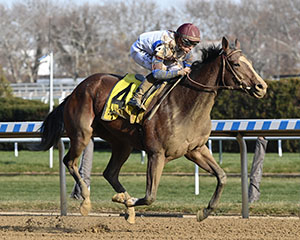 Bank Sting returns to her summer form with victory in Staten Island division of NYSS Sunday at Aqueduct. NYRA Photo.

After registering one of her rare losses in a sloppy renewal of the Empire Distaff Handicap last out, Bank Sting was back with a vengeance in Sunday’s $150,000 Staten Island division of the New York Stallion Series Stakes at Aqueduct.

Foaled at McMahon of Saratoga as a homebred for the McMahons, who are joined in her racing ownership by Hidden Brook Farm, the Central Banker daughter was ready to go nearly from the start of the 7-furlong Staten Island. As the 8-5 favorite The Important One and 9-5 second choice Trinni Luck battled for the lead, Bank Sting sat a few lengths off in third with the rest of the field more than 5 lengths back. Bank Sting crept up after the first quarter to put herself in perfect position as the leaders started to fade after registering a :46.10 half.

The Important One fought on as Bank Sting moved up to challenge her but it was a futile attempt. Within strides, she was swallowed up by Bank Sting, who quickly proved to be much the best. The winner continued to draw away and cross the line an eased down 8 1/4 lengths in front in a time of 1:26.27. Byhubbyhellomoney was best of the rest with The Important One holding on to third by a neck.

Bank Sting was registering her fifth win in seven career starts with the John Terranova trainee’s only losses coming in her debut in late 2019 and the Empire Distaff on Empire Showcase Day Oct. 30 at Belmont Park. She’s now earned $351,300 in those seven starts as Central Banker’s fourth highest earner.

“I’m proud of her. She’s been a special New York-bred for us,” Terranova said. “We’ll take it one race at a time with her.”

It hasn’t been an easy road for the filly or her connections to get to this point, making it all the sweeter.

Their high opinion of her was displayed in December 2019 when she made her race debut in a New York-bred stakes, where she finished fourth. That debut showed plenty of promise but her followers would quickly have to learn the art of patience.

Bank Sting was benched until February of this year. She made the wait worth it, breaking her maiden in her return before scoring three additional consecutive victories. After her Critical Eye victory, she made sure their patience was still intact with some hard luck when scratched at the gate in the Grade 3 Molly Pitcher in July at Monmouth Park. Her next start was in the Empire Distaff, where Terranova admitted she likely needed a race. 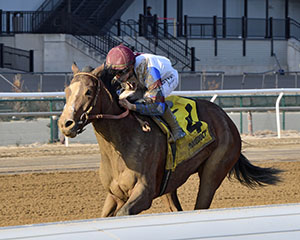 “She missed most of the summer and we were hurrying up to make Empire Showcase Day,” he said of the loss. “We jumped into the Distaff and the conditions were sloppy and it was her first race back. Ideally, if we had got a prep race going into that, it probably would have helped her cause. She came out of that race well and trained forward. Every day has been a good day since then.”

With Sunday’s victory, she now made over 25 times the $14,000 she RNA’d for at the 2018 Fasig-Tipton Midlantic Eastern fall yearling sale. Leaving the ring unsold, her breeders decided to keep her and privately sold part of her to Hidden Brook Farm.

Bee In a Bonnet has visited Central Banker multiple times since her stakes winner was born with Bank Sting having a winning 3-year-old sister named Lot of Honey and a yearling sister. The mare also had a colt by Palace in 2019 and a colt by the ill-fated Laoban in 2021. She visited McMahon of Saratoga’s young stallion Solomini this year.