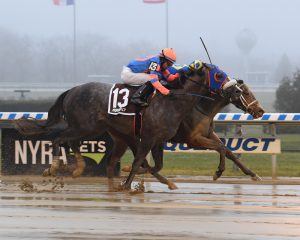 On a foggy Saturday at the Big A, with slop underfoot, Shea D Boy’s Stable 10-1 Bank on Shea, a bay juvenile colt by Central Banker, translated a final surge at the rail into a big payday, just getting his nose in front of favorite Dream Bigger to win the $500,000 Great White Way division of the New York Stallion Stakes (NYSS) series. Repole Stable’s Dream Bigger by Mission Impazible lost nothing in defeat, having already valiantly reeled in another stubborn rival in midstretch.

The Great White Way attracted a large and diverse original field of 14 which, even after a pair of scratches, represented 11 different current or former New York stallions. The group included everything from a pair of maidens to multiple stakes winner Dream Bigger. Four horses entered in the 7-furlong event on the main track had decidedly turf profiles.

After an even beginning, the horses sliced their way through the fog up the backstretch with 79-1 longshot Colormepazzi leading from post two pressed hard by 20-1 Moonachie, who broke from the extreme outside. With these two in the vanguard, the quarter went in 23.51 and the half ticked by in 46.97 over the sloppy (sealed) going. Dream Bigger tracked a length back in third.

Once the field straightened away for the stretch run, Moonachie took control of the top spot. At this point it seemed that the outcome would be a matter of whether or not Dream Bigger, now in second, could collar the new leader.

Dream Bigger did collar Moonachie with sixteenth to go, but Bank On Shea, who raced midpack early, had advanced his way into contention at the rail. Getting up on even terms with Dream Bigger for the last three strides, he won the bob at the wire, securing a nose win.

After six furlongs in 1:12.34, the final time for seven was 1:26.59. Captain Bombastic, by Forty Tales, rallied to finish third as the 3-1 second choice, followed across the line by the overachieving Moonachie in fourth.

Jose Lezcano, who had the call for the first time aboard Bank On Shea, and won his fourth race on the day in the NYSS Great White Way, said, “[Bank On Shea] broke good, but [rating] was kind of my plan. I saw a lot of speed. I didn’t want to be involved in the speed early. I wanted to have one run from the quarter-pole to the wire, and it worked out today. He got to the eighth pole and I saw the other horse keep running. I said, ‘maybe we won’t get there,’ but finally in the last three jumps, he finished. He handled [the wet track] really good.”

Bank On Shea won his Saratoga debut on July 14 with a closing rally. Off until the Notebook Stakes on November 17, he finished third, six lengths behind winner Dream Bigger. Both starts came over fast going.

Henry Argueta, assistant to trainer Jason Servis, observed, “He had never run before on a wet track, but the horse was doing so well in the morning. We were expecting a big race. [Dream Bigger] opened up a lot, but when [Bank On Shea] ran at Saratoga [in his debut win on July 14] he was covered up and when he got to the clear, he took off. At the top of the stretch, I wasn’t sure but when he started running, I thought he might just get there.”

Manny Franco, aboard of Dream Bigger who had won the battle but lost the war, said, “It was a good trip, but he was going seven-eighths for the first time and he got a little bit tired. [Bank On Shea] came running hard. It was a tough beat.

Bred by Dr. Scott W. Pierce and foaled at McMahon’s of Saratoga Thorughbreds, Bank On Shea is the first foal out of Miss Moultree, a daughter of Uncle Mo who did not race. She last changed hands at public auction when purchased by Ellen Caines for just $2,200 at the 2017 Keeneland November sale.

Shea D Boy’s Stable came across Bank On Shea at the OBS Spring sale of 2-year-olds, where they signed a ticket for $110,00.