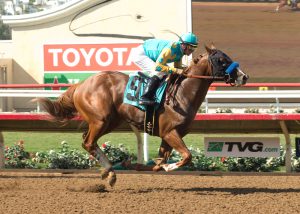 “He’s a winner of $834,993 and the only Grade 1 son of Curlin in New York, pronounced McMahon, adding, “Solomini raced with the best of his class, beating many Grade I winners including McKinzie (placed 1st via DQ to 3rd of Solomini), Bolt d’Oro, Magnum Moon, Mendlessohn, Firenze Fire, Higher Power and others.” He was one of the three finalists for 2017 Eclipse Award Two Year Old Colt (along with Bolt d’Oro – $25,000 stud fee and Good Magic –also by Curlin -$35,000 stud fee).

Raymond J. DeStefano (who was involved with Lou Salerno in the purchase, syndication, and success of Belong To Me) and Hidden Lake Farm’s Chris Bernhard join McMahon in the stallion acquisition. DeStefano commented “the way this Curlin colt grinded his way to the front in deep stretch of the ‘Los Al’ impressed me,” adding “that G1 win would have meant the world to his future at stud. Even Bob Baffert mentioned that he was surprised with the controversial split DQ decision and that Solomini was the better horse that day. To me, Zayat Stables, Bob Baffert, and many racing fans, he is a Grade 1 winner.”

His runner-up performance in the Breeders’ Cup Juvenile and FrontRunner, both Grade 1, along with finishing first in the Los Alamitos Futurity-G1 made an Eclipse Award Finalist for champion two-year-old colt of 2017 along with Good Magic and Bolt d’Oro. Solomini was the only one of his class with two triple digit BRIS Speed Figures at 2. He continued his Grade 1 form at 3, finishing 3rd in the Grade 1 Arkansas Derby after running 2nd in the Rebel S.-G2.

Alan Porter stated that Solomini was “One of the best juveniles of his crop, Solomini demonstrated grade one winning talent at two. By Curlin, two-time  Horse of the Year, outstanding sire, and now a sire of sires, Solomini is out of a Storm Cat mare who is half-sister to Champion Two-Year-Old and grade one sire Midshipman, and to the dam of hot young stallion Frosted.”

Solomini will stand for $6,500 and he joins McMahon’s other stallions for 2020: North America’s fourth leading second crop sire by cumulative dirt earnings, Central Banker at $7,500; Redesdale, another son of Speightstown, out of a full sister to Danehill standing his second year at stud after covering 81 mares in 2019, standing for $5,000 and Eclipse sire Teuflesberg standing for $3,000. All fees are live foal.