Newly Minted runs away and hides in NYSS Park Avenue 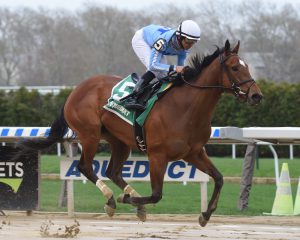 Beach Haven Thoroughbreds’ Newly Minted looks like a filly with a big future. Within eight days, the daughter of Central Banker went from an untried first-time starter to stakes winner while leaving two robust fields in the dust by a combined 13-plus lengths.

Trainer Linda Rice unveiled Newly Minted a week ago at Aqueduct on April 13. The filly went straight to the front of an eight-horse field of New York-bred maidens under Jose Lezcano before opening up to win by 5 3/4 lengths over muddy going. Her final time of 1:11.38 for six furlongs translated into an impressive debut Beyer Speed Figure of 81. The following Saturday she returned in the 26th running of the $200,000 Park Avenue for eligible New York-sired 3-year-old fillies.

Rice explained why she was comfortable wheeling the filly right back. “We’ve given her lot of time to get to this point. She was very professional the other day and ran a big figure. It’s back on short rest, but I wanted the opportunity to look at it and make the decision to run.” And run she did.

Reunited with Lezcano and away in good order from post five as the 3-2 post time favorite, Newly Minted advanced between horses and hooked up early with speedster and Franklin Square Stakes winner Stonesintheroad, who broke from post six.

As the pair carved out opening fractions of 22.71 and 46.24, Newly Minted saved ground through the turn, cut the corner and spurted to the front at the top of the stretch The bay opened up effortlessly in the lane, ultimately winning by 7 1/2 lengths in a final time of 1:18.81 for 6 1/2 furlongs over the sloppy (sealed) going. Kid is Frosty rallied from midpack to finish second, while Bangle Gal finished third. [VIDEO REPLAY[2]]

Lezcano reported, “[Newly Minted]’s a very nice filly. Last time, I had to [urge] her a little at the quarter-pole. This time, she did it so easy. She did everything right. She handled the ground good. I had so much horse.”

John Sakkos, managing partner of Beach Haven Thoroughbreds, enthused, “I was very happy. I looked out this morning and saw it raining and I was extremely happy because I know she likes it a little bit wet. It was a good day.”

Bred by Chester and Mary Broman, Newly Minted is the second foal out of the couple’s homebred two-time winner Newbie (Bernardini), both of whose foals to start have won. She has a juvenile filly by Carpe Diem named Take the Chance, an unnamed yearling filly by Speightstown and was bred to Classic Empire last year.